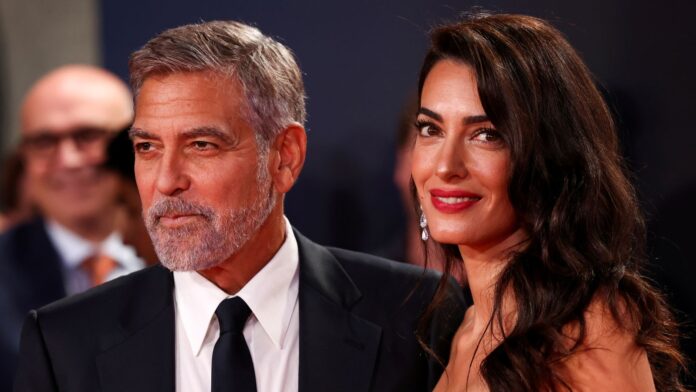 George Clooney and his wife Amal put on a loved-up display at the premiere of his new movie – but all eyes were on Amal and her stunning after-party dress.

The 44-year-old stole the show after slipping into a dazzling sequin yellow mini dress following the London premiere of George’s new film Ticket to Paradise, which also stars Julia Roberts.

The couple, who wed in 2014 and share five-year-old twins Ella and Alexander, were pictured hand-in-hand as they left their swanky London hotel to continue celebrating George’s latest movie.

Amal’s figure-hugging dress featured a high neck and billowing sleeves and showcased her incredible figure and long legs which were elongated even more thanks to her towering metallic heels.

Her dark hair was styled into tumbling waves, and she complimented her look with bronzed metallic eye makeup and a classic red lip.

She completed her show-stopping outfit with a small gold clutch.

Earlier in the evening, Amal joined George on the red carpet and looked incredible once again wearing a mint green gown that was adorned with sparkling beads.

The couple posed with George’s co-star Julia, who opted for an eye-catching black Alexander McQueen gown embroidered with graffitied hearts and initials.

Ticket to Paradise marks Julia and George’s fifth movie together. The film revolves around two divorced parents, played by the lead stars, who travel to Bali to stop their daughter from marrying a man she just met.

Hijinks ensue as the pair reluctantly decide to join forces to get in the way of the wedding while trying to remain incognito about it.

George spoke of his return to rom-com in a joint interview with Julia in The New York Times earlier this week, explaining: “They sent me the script, and it was clearly written for Julia and me. In fact, the characters’ names were originally Georgia and Julian.”

Julia also added: “We have a friendship that people are aware of, and we’re going into it as this divorced couple. Half of America probably thinks we are divorced, so we have that going for us.”