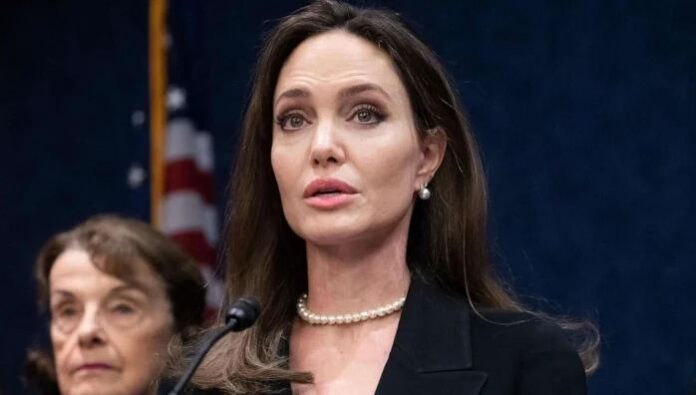 Is Angelina Jolie lonely and desperate for friends? A gossip magazine claims the A-list actress is “the loneliest woman in Hollywood.” Let’s investigate the wild rumor.

‘Lonely’ Angelina Jolie ‘has no one to talk to’?

This week the National investigator reports that Angelina Jolie has become completely isolated and no one is keeping her company. According to the article, the Girl, interrupted star is so desperate for human interaction that she chats at length with every delivery person who crosses her path.

In fact, she often admits, “I don’t have any friends,” says an insider. “You’d assume a celebrity as popular as Angie would have a ton of friends, but you’d be wrong.”

Sources say Jolie’s divorce from Brad Pitt and extremely busy parenting have left her socially incapacitated. “Besides the children, she has no one to go out with to the cinema and restaurants, or just to have a drink,” the tipster said. “It really bothers her.”

Apparently Jolie uses work to buy herself new friends. The actress recently cast her Eternals co-star Salma Hayek in a movie she’s directing, but it probably didn’t work. “This is an attempt to get Salma to be her new BFF,” a snitch whispers.

“But Salma has her own busy life and doesn’t even spend most of her time in Hollywood.” At the same time, the source claims that Jolie plans to build a house for herself in Africa. “Moving to Africa will make her more isolated than ever!”

After taking a closer look at this rumor, we are still not convinced. The first red flag we noticed is the identity of this alleged insider. While tabloids usually get away with leaving their sources completely anonymous, this time around, the outlet decided to give us more of a hint as to who we’re dealing with.

According to the tabloid, it gets its information from “a source close to members of the star’s domestic staff.” That’s about as close to the definition of “hearsay” as you can get.

So no, we don’t take this tipster’s word as gospel. But let’s take a look at Jolie’s actual social life anyway. Looking at everything Jolie has on her plate, we wouldn’t be surprised if she sometimes struggles to get out. She is a mother of six, a dedicated humanitarian and a busy filmmaker. People put their social lives on the back burner for a lot less, so this isn’t the most outlandish idea we’ve heard.

Does Angelina Jolie have friends?

But to say she’s lonely, completely isolated and “desperate for companionship” is too much for us to believe. She has friends, but they may not be the high-profile socialites you’d expect from an A-lister like Jolie in her circle. Just a few weeks ago, Jolie posted a photo in honor of her “new friends” after she dined with a group of refugees.

And last year, Jolie took a week-long vacation in Italy with her friends, artists JR and Prune Nourry. Not long after, Jolie was memorable on Salma Hayek’s Instagram post for shoving her face into her birthday cake.

Obviously, Jolie is not going to be a recluse. She is an adult with a busy career and private life. It’s okay if she doesn’t go to town with the girls every weekend, and she can keep that part of her life private. But it’s obvious that the magazine was trying to paint a completely inaccurate picture of the actress.

More gossip about Angelina Jolie from the tabloid

While this story certainly took some unraveling, it didn’t really shock us. When dealing with the National investigator, we learned what to expect. Last year, the outlet reported that Angelina Jolie was “skeletal” and warned about her dangerous weight loss.

Then the magazine claimed that Jolie was causing her children emotional harm with her ongoing custody battle. And more recently, the publication claimed that Jolie banned Brad Pitt from their kids’ birthday parties. This is certainly not the first time that the National investigator surpassed with a story about Jolie.