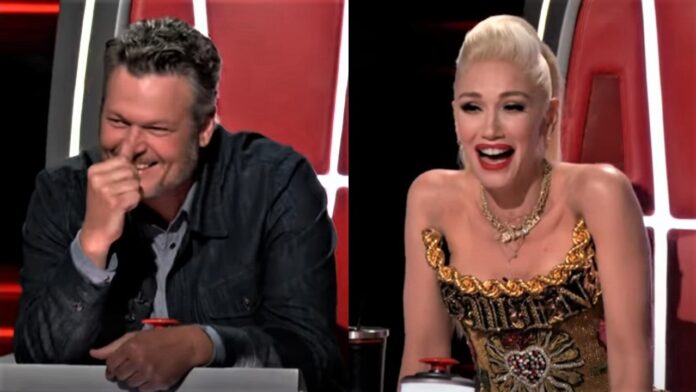 This is going to sound unbelievable, but is Blake Shelton secretly disgusted by Gwen Stefani? After a year of marriage, you’d think this would be an obvious no.

However, rumors persist that she’s addicted the plastic surgery and Shelton is having none of it. Let’s study these cruel tales and learn if there’s anything to this story.

Per the National Enquirer, Stefani is scaring her friends with her copious fillers. An insider said, “It’s no secret she’s been obsessed with Botox and filler for years—but she’s really gone overboard now …

She can’t even move her face and her smile looks distorted because of all the filler!” Shelton had apparently noticed the problem and has been on her case about aging naturally.

The story claimed to have access to close friends and Shelton himself, but none of those folks are going to talk to the Enquirer. Stefani may have had a little work done, but she’s still completely recognizable and can emote. She looks stunning and it’s her body to do what she’d like. This was nothing more than an elaborate insult.

The Enquirer was at it again when it announced Stefani looked like Frankenstein’s monster. She appeared at AFI’s tribute to Julie Andrews, and a source says Shelton was turned off. “Blake is begging Gwen to stop the plastic surgery … It’s turning him off and he doesn’t want her becoming that Catwoman Jocelyn Wildenstein.”

This story was almost identical to the earlier article about Stefani’s looks. It was just updated a little bit to reflect the AFI show, but that was it. Shelton isn’t going to spill dirt about Stefani to this rotten tabloid, so the whole story was false.

When is the Enquirer going to leave Stefani alone? A few weeks after bashing her AFI look, it announced Stefani was obsessed with surgery and it was rocking her marriage.

A source said the surgery was “a real turn-off for Blake and he’s begged her to stop… but Gwen won’t listen.” The two were less intimate because of her face, so the No Doubt singer called an intimacy coach for help.

You’d figure the tabloid would get bored of regurgitating the same story over and over again. You would be wrong. This story offered nothing new.

Stefani and Shelton are still happily married, and she still looks like Stefani. The couple is absolutely in love and you’ll get to bask in their glory when The Voice returns this fall.