GamesChowkPolitical, Royal, Games and Health News
HomeNewsNew Book Claims It Was Camilla Bowles Who Made Racist Comment When...
News 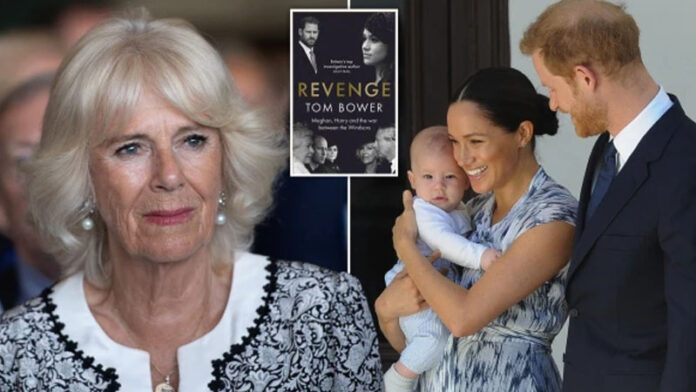 “Revenge: Meghan, Harry and the War Between the Windsors” claims that Camilla joked it would be “funny” if Harry’s unborn child with Meghan was born with a “ginger afro.”

It’s been a mystery since Prince Harry and Meghan Markle’s blockbuster sit down interview with Oprah — which member of the royal family allegedly made racially insensitive remarks about baby Archie before he was born?

“Revenge: Meghan, Harry and the War Between the Windsors” claims that Camilla joked it would be “funny” if Harry’s unborn child with Meghan was born with a “ginger afro.”

“The palace insiders, not officially on the record, but behind closed doors, have been very quick to try and speak out against that allegation, saying that it’s absolute nonsense, that comment was not made,” Daily Mail editor Charlie Lankston said.

But author Tom Bower was defiant on British TV.

“I work very hard to make sure all I write is true and accurate. It’s obviously checked and double checked and sifted by lawyers. We don’t take any risks unnecessarily, but the book is still quite explosive, ” Bower said.

The book also goes into the rumor that Meghan Markle made Kate Middleton cry in the days leading up to her 2018 wedding.

Speaking to Oprah, Markle claimed that the “reverse happened” and that Middleton was upset and made Markle cry.

But the new book is placing the blame squarely back on Meghan, writing that it was Kate who “burst into tears” after Meghan “compared Princess Charlotte unfavorably to her best friend Jessica Mulroney’s daughter.”

“This book states that the two of them got off on the wrong foot from the get go,” Lankston said.