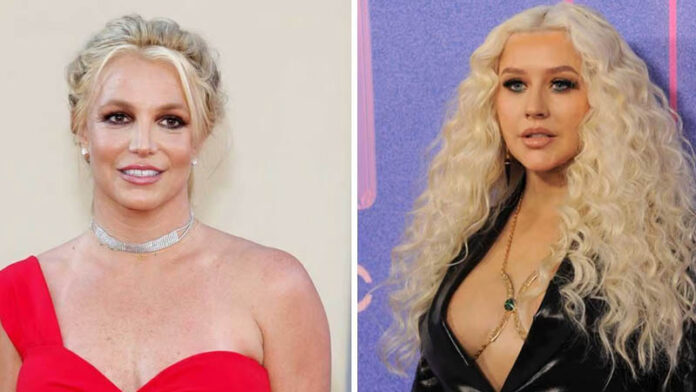 It looks like things are getting really ‘Toxic’ here, and this time, Britney is not at the receiving end.

Yesterday, the 40-year-old pop icon shared a controversial post on her Instagram, which triggered a lot of people.

Spears, who recently changed her Instagram account’s name to Channel 8, shared a photo that said,

“I found there was only one way to look thin: hang out with fat people.”

Not just that, but she also wrote along a caption mentioning fellow American singer and television personality Christina Aguilera’s dancers.

“I wish I could have chosen the nannies for my children … my dancers … I mean if I had Christina Aguilera’s dancers I would have looked extremely small. I mean why not talk about it??”

“Don’t you think my confidence would have been a bit better if I could choose where I lived, ate, whom I called on the phone, dated and who was on stage with me!!!”

“It’s hard sometimes now I see how much of my womanhood was stripped away at that time and every person sat back and didn’t say a thing!!! Anyways … I will be here talking about things people NEVER talked about!!!”

Her post caused a stir on social media, and fans asked Britney to remove it.

“Please delete this,” one of the top comments read.

“You can speak YOUR truth without making an effort to offend someone,” a fan wrote.

“I’m so disappointed,” another commented.

“Oof. Love Britt- but this was in bad taste. Body shaming to make yourself feel better is not where it’s at,” said another disappointed fan of the singer.

Page Six reported that Christina Aguilera unfollowed her on the platform in response to the Break the Ice singer‘s offensive post.

The 41-year-old Genie in a Bottle singer hasn’t spoken out on the matter yet.

Ever since her conservatorship ended in November last year, Britney Spears has become aggressively vocal about her views and opinions on Instagram. The singer does not shy away from posting her almost nude photos on the app; she even calls people (mainly her family members) out for not liking her way of life.

Newsweek reported that in another deleted post on Instagram, Britney wrote a cryptic message picking on her former friend, Christina.

“In the post, Spears wrote a cryptic message, telling fans information she got from “a little birdie” and references Aguilera through one of her songs, ‘What a Girl Wants.’”

In her now-deleted post, Britney wrote, “Well, someone was singing about ‘What A Little Girl Wants” I mean, maybe a Pink cloud told me, either way… In conjunction to most performers who praise their roots and father’s background even if he abused them.”

“I would raise a question of BEAUTIFUL WHITE LIES which years to make no waves with me even when I read heart… either way… are we able to show this little girl how much we care??”

Christina has been quite vocal about her traumatic childhood due to her abusive father.

In June 2021, she wrote an open letter saying that Britney deserved to have the freedom of living her life on her own terms.

“To a woman who has worked under conditions and pressure unimaginable to most, I promise you she deserves all of the freedom possible to live her happiest life.”

“My heart goes out to Britney. She deserves all the TRUE love and support in the world.”

But according to Newsweek, Britney criticized Aguilera on her Instagram in November 2021 for not speaking about her conservatorship during a red carpet interview.