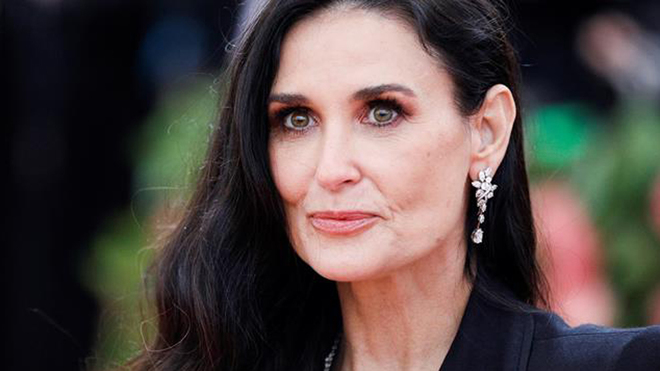 Demi Moore took to social media with a fabulous selfie on Wednesday, which sent fans wild as she posed in just an oversized orange jacket.

Sharing the candid update on her Instagram Stories, the actress, 59, was a vision as she shared two photos that perfectly captured her incredible sky-high legs and long brunette tresses.

Captioning the post, she penned: “Living in my new jacket from the Glenda Bailey x @PeruvianConnection collab,” alongside a red love heart emoji.

Demi looked sensational in the snaps, the first was a close-up of the star’s face and captured her glowing complexion. The second was a full-length photo which was also a candid mirror selfie, but this time the Ghost star captured her incredibly toned legs in the shot.

Friends and fans flocked to reply to the incredible update. One commented: “Hello gorgeous!” A second added: “Wonderful and beautiful Demi.”

A third said: “So beautiful love a closeup.” A fourth added: “Absolutely stunning as always!”

The fabulous update appears to have been taken in the star’s beautiful home in Idaho where she has owned an impressive property since 2000.

She bought the home following her divorce from Bruce Willis – who also had a property in the state’s Sun Valley area – and continued to raise her daughters, Rumer, Tallulah, and Scout, there.

Demi recently shared a stunning update from the sprawling property after enjoying a summer away touring Europe.

Captioning the photo, she penned: “Home, sweet home,” alongside a little house emoji, and the post received likes from her daughter Rumer, as well as from her ex-husband’s wife, Emma Heming Willis, who Demi appears to have a great relationship with.”

In the beautiful shot, she is seen sporting baggy denim overalls layered over a crisp white t-shirt, along with her signature aviator style glasses and long black hair.