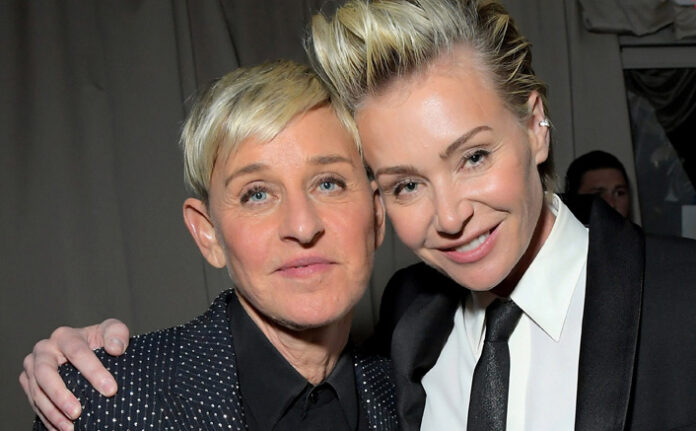 Ellen DeGeneres and her wife Portia De Rossi marked their 14th wedding anniversary on 16 August, with the TV host sharing a sweet tribute that left her followers in tears.

A video compilation highlighted some of the couple’s best memories together, including one clip from The Ellen Degeneres Show where Ellen gets very emotional as she recalls her wife’s wedding speech. Quoting part of it in her Instagram caption, she wrote: “‘It’s good to be loved. It’s profound to be understood.’ I love you, @portiaderossi. Happy 14!”

The couple tied the knot at their home in 2008, shortly after same-sex marriage was legalized in California – see their matching outfits and why they changed their plans a the last minute.

Where did Ellen DeGeneres and Portia De Rossi get married?

Ellen and Portia married at their home in Los Angeles on 16 August 2008. Only 19 guests attended the couple’s intimate wedding ceremony, which took place on their living room floor, before tucking into a vegan dinner and vegan red velvet wedding cake. The couple has since revealed they had their first dance to Stevie Wonder’s Ribbon in the Sky.

The couple had originally planned for their wedding to be a larger, star-studded affair, but Portia previously said they changed their plans as it “just got to be too big and stressful”.

Who officiated Ellen and Portia’s wedding?

The ceremony was officiated by the late philosopher and self-help guru Wayne Dyer, and the couple revealed what he said in an Instagram video for their tenth anniversary.

My dear Portia and Ellen,” he began. “Today we have taken a giant step forward toward the ideal that all of us, with no exceptions, are not only created equal, but we each have the unalienable right to pursue our own happiness.”

What did Ellen and Portia wear for their wedding?

The pair both wore bespoke Zac Posen outfits; an ivory blouse, waistcoat, and trousers for Ellen, and a tulle ball gown with blush pink skirt for Portia.

What have Ellen and Portia said about their wedding?

Ellen shared a look back at their big day in honor of their tenth anniversary in 2018, writing: “This was such a special day for us.” Last year, she shared another throwback wedding photo in which she described Portia as “my favorite person”.