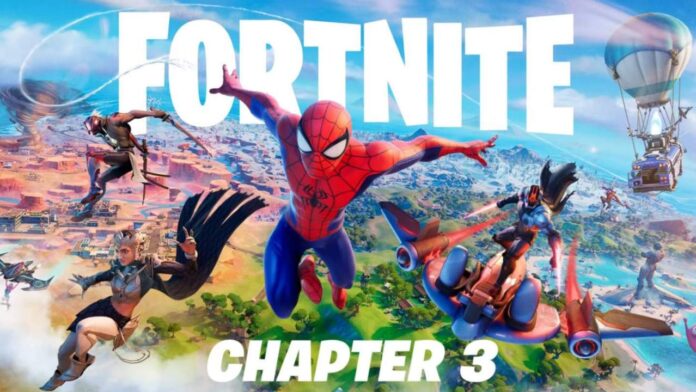 With Fortnite‘s climactic showdown with the Cube Queen now over, the game has undergone a rather dramatic change in the transition to Chapter 3. Of course, we wouldn’t expect anything less when the transition from Chapter 1 to Chapter 2 brought similarly massive change. This time around, the map has been flipped upside down, giving players a whole new island to explore.

The beginning of a new chapter for Fortnite needs a suitably big reveal, and that’s what we got with Fortnite Chapter 3. Not only has the map been flipped, revealing an entirely new map on the other side, but Epic Games has also confirmed that Spider-Man will feature in the first season.

You’ll certainly have the chance to dress up as Spider-Man, though. Spider-Man’s outfit is included in the Chapter 3, Season 1 battle pass. The battle pass also includes outfits like the Wanderer Ronin, the Outlaw Harlowe, and The Foundation, who serves as the leader of the Seven. Epic also says that other Spider-Man outfits will be available in the shop throughout the season, so this is undoubtedly Spider-Man’s time to shine in Fortnite.

Of course, Spider-Man and a new map aren’t the only new things about Chapter 3. In addition to web-swinging, players can also slide across the ground or downhill, Apex Legends-style. Knocked-out players will also find that their crawl speed has been increased in Chapter 3, which should make retreating easier in team games.

In a significant shakeup to battle pass progression, Epic has revealed that Fortnite Creative now supports accolades and, by extension, battle pass XP. Creators will need to include accolades in the maps and modes they make in Creative, but still, that means you don’t necessarily need to play battle royale just to level your battle pass.

Chapter 3 also introduces camps, which can be set up to heal and stash loot. It sounds like tents will even persist between matches, so you can lay down a camp in one match, store some items in it, and then go find them in future matches.

Epic has also introduced a new system that will award a crown to players when they win a battle royale match. The winning player will be wearing the crown in their next match, which grants bonus XP for as long as they have it. It’ll make you stick out like a sore thumb, though, so be aware that you’ll be a lot easier to spot while wearing the crown.

Finally, it seems we can expect the map to change throughout the season. That in itself is nothing new because Fortnite‘s map is in a constant state of flux, but the Chapter 3 map starts out covered in snow that will melt as the season progresses to reveal new points of interest. It’ll be interesting to see how the map changes over the course of the season, along with how much of an impact that’ll have on gameplay.

Sadly, the Epic Games website doesn’t reveal the full season 1 battle pass, but it does hit the high points, showing off all of the skins available through it. In addition to the skins we listed above, players will be able to unlock the Shanta, Lt. John Llama, Gumbo, and Haven skins. You can check out the trailer for the battle pass embedded below.