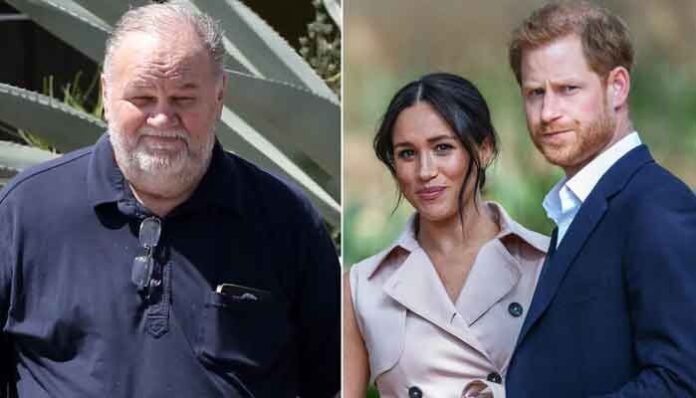 Just days before Thomas Markle was due to travel to England for the queen’s Platinum Jubilee, it was announced he had suffered a serious stroke. Five days after the episode, Thomas was discharged from the hospital and is giving the public an update on his condition.

“I feel hugely grateful and know how lucky I am to be alive,” Thomas told the Daily Mail Sunday. “I want to thank everyone, especially the wonderful doctors and nurses who saved my life. They are angels.”

“I have been deeply moved by [the] loving messages I’ve received from all over the world,” he continued. “People have been so kind. I can’t speak right now, but I am working hard and will thank people properly when I can.”

Thomas’ stroke impacted his speech abilities, which is what the last part of his statement referred to. The Daily Mail shared that he shared his message with them by “writing on a whiteboard with a felt-tip pen.”

The stroke was caused by a blood clot in Thomas’ brain. His family became worried about him after his daughter Samantha Markle noticed he was having trouble speaking on the phone with her. She called a local friend to go check on him, and Thomas was soon rushed to the hospital in Rosarito, Mexico.

From there, he was transferred to a hospital in San Diego, California, where he’s been for the last five days before his discharge. Even though he is making progress in his recovery, Thomas said that he recognizes that he is facing “an uphill battle.”

“I have lots of hard work to do and will do it,” he shared. “I want to get well. I’m so lucky to have had amazing care and love. Thank you everyone.” Thomas’ stroke caused him to miss his planned trip to the UK to celebrate Queen Elizabeth’s Platinum Jubilee, which his estranged daughter Meghan Markle will be attending.

The Duchess of Sussex has not made any public statements about her father’s condition, but according to sources, she is “concerned” and “wants to know if there is any way to contact her father privately, without other family knowing about it or having to get involved.”

It’s understandable that Meghan would not want her family members involved; Samantha has already pointed the finger at her half-sister, blaming the duchess’ “disregard” for their father’s stroke. Many were concerned about Thomas’ condition in the days immediately following his stroke, so it’s good to hear that his health is improving!