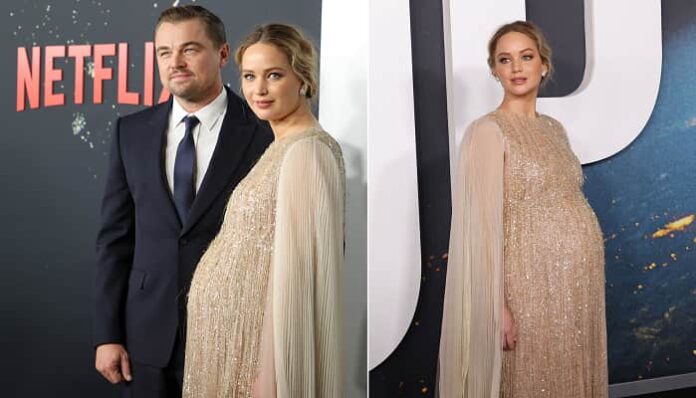 Jennifer Lawrence was glowing at the premiere for her upcoming Netflix movie Don’t Look Up, as she walked down the red carpet with her growing baby bump.

The Oscar winner wore a glittering gold Dior gown to the New York City event as she posed for photos by herself and with co-stars including Leonardo DiCaprio.

But while she was heaping praise on her co-stars to Entertainment Tonight, Lawrence was keeping mum about her expectations for motherhood. She told the American outlet, “I don’t know, I’m just going to have to find out”.

The forthcoming baby will be the first child for her and husband Cooke Maroney. The pregnancy was reported by People three months ago, but a due date has not been confirmed.

Lawrence, 31, and Maroney, 37, married in October 2019 in a ceremony attended by Adele, Emma Stone and Kris Jenner.

She recently opened up to Vanity Fair about the emotional fallout from a photo leak in which nude images of her were stolen and then published without her consent.

She told VF: “Anybody can go look at my naked body without my consent, any time of the day. Somebody in France just published them. My trauma will exist forever.”

Lawrence is one of the most high-profile actors in Hollywood, breaking out in 2010 in Debra Graniak drama Winter’s Bone, for which she was nominated for a lead actress Oscar at the age of 20.

Lawrence went on to feature in a range of projects, from franchise blockbusters such as The Hunger Games and X-Men movies to award-winning films such as Silver Linings Playbook, for which she won an Oscar, and American Hustle.

Don’t Look Up, to be released on December 24, will be Lawrence’s first role since Dark Phoenix in 2019.

The film is a comedic farce directed by Adam McKay (The Big Short), and stars her and DiCaprio as two frustrated scientists trying to warn the world of an impending apocalypse. It also features Meryl Streep, Jonah Hill, Rob Morgan, Cate Blanchett and Timothee Chalamet.