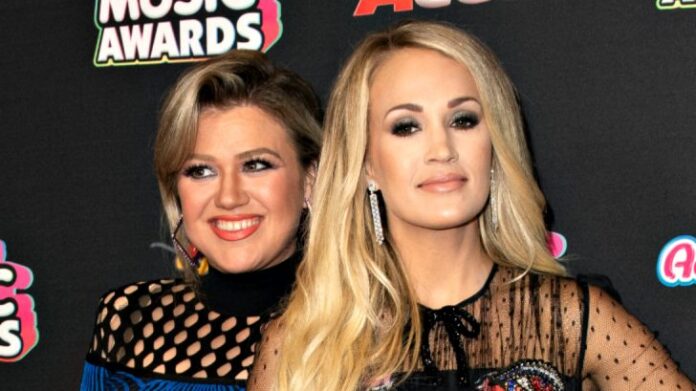 Are Kelly Clarkson and Carrie Underwood feuding? One tabloid claims the former American Idol winners actually can’t stand each other. Let’s dive into the rumors of bad blood between the beloved musicians.

This week, the National Enquirer reports Kelly Clarkson poked a sleeping bear with her latest release. According to the article, Clarkson’s recent EP of covers, Kellyoke, couldn’t have had worse timing, since it was dropped just a day before Carrie Underwood’s own album, Denim & Rhinestones. And sources spill that this ordeal has just awakened an old rivalry between the two most successful American Idol winners.

“They may say there’s been no feud between them, but anyone who knows them will tell you, they’re not friends, nor will they ever be,” an insider dishes.

“The bottom line is, Carrie and Kelly don’t like each other much, and the constant comparisons drive them both crazy. The only similarity between them is they won their seasons of American Idol. And they’re very competitive because of it.”

And sources reveal another point of friction between the two stars. Apparently, Underwood has refused to appear on Clarkson’s talk show, and it’s always rubbed the host the wrong way.

“Kelly wanted to show everyone they could be friends, and it seemed like Carrie turned up her nose at the offer,” the tipster confides. “Kelly’s never forgotten it. She thinks Carrie’s stuck up. Anyone waiting for Carrie to turn up on Kelly’s talk show is going to have to wait a little longer, and possibly until hell freezes over!”

Nice try, but we aren’t buying it. First of all, we already debunked this painfully unoriginal story about Clarkson’s new EP when Star published it, so we aren’t going to be fooled this time around.

But, nevertheless, let’s get into why we find this tale so unlikely. First of all, the artists’ respective releases weren’t exactly feud-worthy. Clarkson’s Kellyoke was an EP, not a full-length album, and it didn’t even contain any original songs.

On the project, she covered mostly pop artists like Billie Eilish and The Weeknd but managed to sneak on some Radiohead and Linda Ronstadt. The fun EP was a big hit with fans of Clarkson’s Kellyoke segment on her talk show, but it wasn’t exactly competing like a full-length, original Kelly Clarkson album would have.

But Underwood’s release, on the other hand, was her big return to secular country music, having spent the last few years making sacred records. It is ridiculous to suggest it could be the least bit overshadowed by Clarkson’s EP.

But what really caught our attention in this article was the claim that Underwood would never be on Clarkson’s talk show. Now, either the magazine has no problem publishing blatant lies, or it really was so lax on its research efforts that it missed this crucial piece of information: Carrie Underwood has been on Kelly Clarkson’s show.