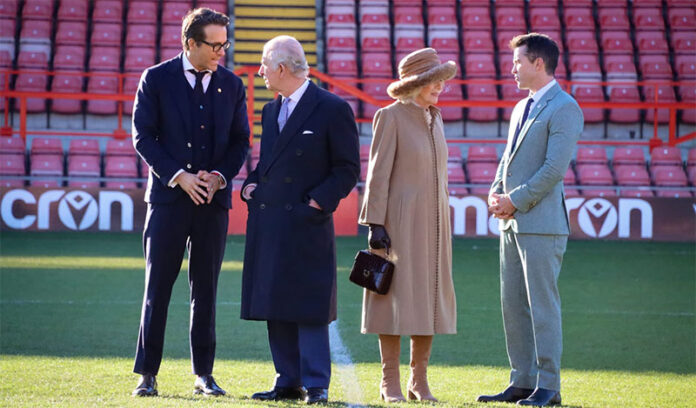 King Charles and the Queen Consort have met with Hollywood stars and Wrexham AFC owners Ryan Reynolds and Rob McElhenney.

Charles III and Camilla travelled to Wales on Friday – their second visit to the country since he became King.

The King and the Queen Consort met and chatted with the co-owners as well as both the men’s and women’s players.

As well as visiting the Racecourse Ground, they are attending a celebration of Wrexham becoming a city.

Kim Dutton, captain of the women’s team at Wrexham told ITV News that the team were training on the pitch when the Queen Consort went over to greet them.

The Queen Consort asked if the team members were local to the city, congratulated them on their recent successes this season and wished them well in future games.

Paul Johnson told ITV News he was on his way back from a trip to Chester Zoo when he saw the crowds outside the racecourse.

He stopped and walked over to be greeted by King Charles.

Following the meeting, Rob McElhenney tweeted, “You really have to watch Welcome to Wrexham for this to make sense. And even then, it still not might make sense.”

The visit of the royal couple comes after a new Netflix documentary on the Duke and Duchess of Sussex began streaming on Thursday, in which Harry accused the royals of having a “huge level of unconscious bias” and Meghan saying the media wanted to “destroy” her.

Their Majesties met with players to hear about the redevelopment of the club after Reynolds and McElhenney’s takeover in late 2020.

When Reynolds and McElhenney bought Wrexham AFC, they said they wanted to return the club to the English Football League.

As well as that, they want to increase attendances in an improved stadium, while seeking to make a positive difference to the wider community.

Earlier this week McElhenney promised to match the donations raised by a north Wales hotel to help out a local food bank in the area.

The vow came in response to a tweet posted by Wayne Jones, who owns the Turf Hotel, which read: “Sadly we will not be opening this year to feed the homeless.

“However I will be donating my entire weeks profits from Monday December 19th to December 24th to Wrexham food bank and other local charities.

“Anyone wishing to donate and help is very welcome to. Times seem bleak at the moment so it’s vital we all stick together and do what we can.”

Responding to the tweet, McElhenney promised: “And we’ll double it. Drink up everyone!”

The stars have chronicled their takeover of the club in documentary Welcome to Wrexham, which was being filmed when the King and Camilla visited.