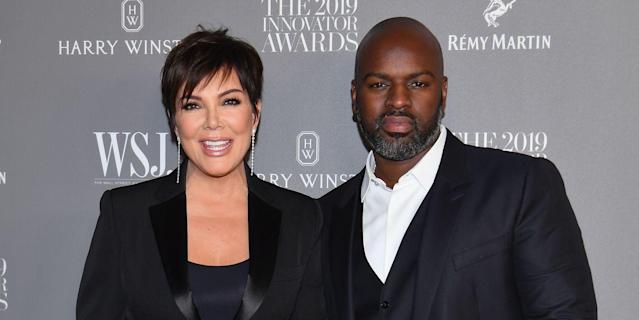 Is Kris Jenner giving Corey Gamble the cold shoulder? According to one tabloid, the business mogul would rather drink than spend time with her longtime partner. Here’s what we know.

This week, the Globe reports Kris Jenner hasn’t been giving Corey Gamble much attention lately. According to the article, the mom of six is too busy boozing to pay Gamble any mind. “He’s been putting up with Kris’ boozy sideshow antics during the eight years they’ve been together,” an insider spills.

“But Kris has so many plates spinning from the moment she wakes until her head hits the pillow, so it’s hardly her fault she needs to take the edge off with a drink. And Corey knows better than to challenge her or complain.”

But nevertheless, sources reveal that Jenner’s love of cocktails has put a serious dampener on her and Gamble’s intimate life. “These days she’s all about money, family, food, and booze.

Physical fun is way down the list and Corey doesn’t seem happy about it,” the tipster squeals. “Kris would rather get sloshed these days than get romantic, and you have to wonder how much longer Corey’s going to put up with it. Trouble is, no one can tell Kris what to do or not to do!”

The first question on our minds is this: Who in the world is spilling this information to the tabloids? Both Jenner and Gamble are too smart to let these personal details slip to anyone they didn’t trust.

And as most people probably know, the main people Jenner trusts are her family. So, since we’re absolutely certain that Kim Kardashian and her siblings aren’t bending the ears of the Globe, we can’t help but go into this investigation with the highest degree of skepticism.

But when we do take a look at Jenner and Gamble’s relationship, it doesn’t seem like anything is awry. Jenner recently told People that Gamble is an “astounding” partner who always supports her career.

Not to mention, Jenner recently announced on The Kardashians that she and Gamble had moved in together. And the manager even posted a glamorous photo of her and Gamble to Instagram just the other day.

So, it’s obvious to us that this report was just mindless gossip, and Jenner and Gamble are doing just fine.

The Globe‘s past reporting on Kris Jenner truly speaks for itself. Last year, the outlet reported Corey Gamble planned to dump Kris Jenner. Then the magazine claimed Gamble was getting impatient because Jenner wouldn’t give him any money.

And more recently, the publication alleged Jenner refused to marry Gamble so she could protect her fortune. Given the outlet’s history of spreading lies about Jenner, we’re certain that no one close to her is talking to this rag.