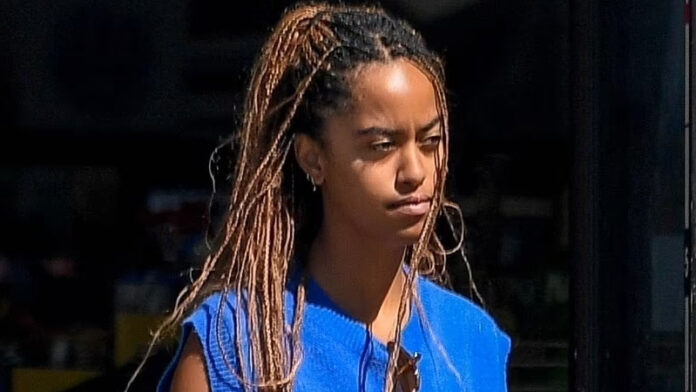 Malia Obama‘s latest style statement was a bold one as she wore a pair of denim hotpants and a very edgy top while out in Los Angeles.

The screenwriter looked toned and athletic as she stopped to buy snacks at a 7-Eleven in LA.

Malia teamed her ripped shorts with a bright, blue knitted vest and walking boots in the photos published in the Daily Mail.

The hard-working 24-year-old is carving out a career in screenwriting after graduating from Harvard and moving to LA.

She’s since landed a job working with Donald Glover on his new Amazon series – with the working title, Hive – and it sounds like she’s doing an incredible job.

Speaking to Vanity Fair earlier this year, Donald spoke about his Beyonce-inspired project and opened up about Malia’s work too.

He added: “I feel like she’s just somebody who’s gonna have really good things coming soon.”

It won’t come as a surprise to Michelle and Barack that Malia is so dedicated to her craft as, they’ve been vocal about how proud they are of both Malia and her sister, Sasha.

On Father’s Day this year, Barack also paid an emotional tribute to his daughters when he shared a photo of the famous family and captioned it: “Happy Father’s Day to all the dads and father-figures celebrating today! Of all that I’ve done in my life, I’m most proud of being Malia and Sasha’s dad.”

Share
Facebook
Twitter
Pinterest
WhatsApp
Previous articleCharles III’s new cipher explained and why the English one is different from the Scottish one
Next articlePrince Harry Blindsided By King Charles And Camilla, Queen Consort’s Rapid Triumph