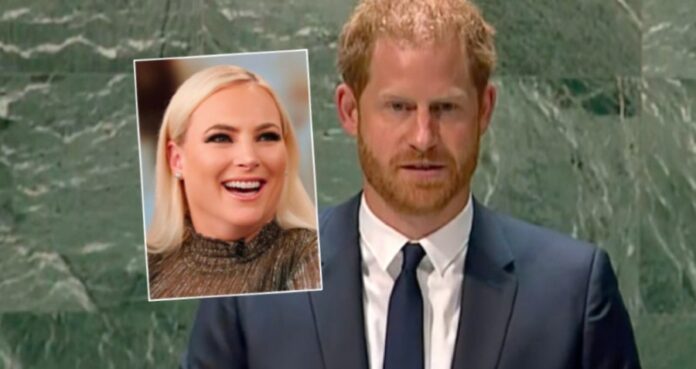 Right-wing political commentator Meghan McCain has criticized Prince Harry over his speech at the United Nations on Monday commemorating Nelson Mandela International Day, which she has called “wildly insulting” to the American people.

Speaking to the UN general assembly in New York, Harry referenced climate change and how it is “wreaking havoc on our planet,” as well as the weaponization of “lies and disinformation at the expense of the many.”

One of the most potent statements made during his speech was a comparison between the overturning of constitutional rights in the U.S. and the war in Ukraine.

“From the horrific war in Ukraine to the rolling back of constitutional rights here in the United States, we are witnessing a global assault on democracy and freedom—the cause of Mandela’s life,” he said.

Meghan McCain, inset, criticized Prince Harry for comparing rulings made by the U.S. Supreme Court about constitutional rights to the war in Ukraine. TIMOTHY A. CLARY/AFP via Getty Images/Paul Morigi/Getty Images

Despite not mentioning it by name, Harry’s comments follow the overturning of Roe v. Wade by the Supreme Court in June, his thoughts on which were made clear by wife, Meghan Markle, in a conversation with leading feminist Gloria Steinem that was published by Vogue.

Meghan described Harry’s reaction to the Supreme Court’s ruling as “guttural” after calling him a “feminist too.”

For McCain, Harry’s grouping of a ruling by the U.S. Supreme Court and the war in Ukraine as examples of assaults on democracy and freedom was a condemnation of the country in which he has chosen to live.

“The speech was confusing and wildly insulting to the undoubtedly few Americans, who may have been watching,” she wrote in a column for the Daily Mail.

“According to Prince Harry, counted among the worst catastrophes plaguing the world right now are the coronavirus pandemic, climate change, lies and disinformation, the war in Ukraine and… the Supreme Court decision overturning Roe versus Wade. Or at least, that’s what his audience was left to believe.”

“Excuse me? Which one of these is not like the other?” she continued.

“COVID has killed more than 6.3 million people worldwide. The war in Ukraine has killed tens of thousands. And the Supreme Court handed down a decision consistent with a widespread interpretation of the U.S. Constitution.

“Those are not in the same league.”

She then went on to state that “just because one may disagree with the outcome of a Supreme Court ruling, does not make it a threat to democracy.”

McCain has become a vocal critic of Harry and Meghan, despite initially celebrating the couple after their interview with Oprah Winfrey in 2021.

On the potential damage that the interview had on the monarchy McCain told The View: “If we have two American women, Meghan Markle and Oprah Winfrey, who are single-handedly finishing what George Washington and our revolutionary counterparts did—I’m all for it.”

The daughter of former Republican Senator John McCain has previously credited Harry’s calling the First Amendment “bonkers” as a turning point in her support for the couple.

Appearing on the Armchair Experts podcast with host Dax Shepard in 2021, Harry was accused of attacking the U.S. constitution.

“I’ve got so much I want to say about the First Amendment as I sort of understand it, but it is bonkers,” he said.

“It is hard for me to understand why anyone should care what the Duke of Sussex thinks —let alone what he thinks about America,” McCain said in her Daily Mail article.

“He has lived here all of 20 minutes, yet he has decided that makes him an expert.”

As well as criticizing Harry’s comments on the United States’ potential contribution to what he called the “global assault on democracy,” McCain also accused the prince of being a climate change “hypocrite” over his use of private jets.

“Harry can’t even fix the problems in his own family? Why does he think trashing America can somehow fix anything here?” she asked.

Harry was invited to give the keynote speech at the UN’s commemoration of Nelson Mandela International day because of his links with the Nelson Mandela Foundation.

The prince paid a touching tribute to the former South African president who was a political prisoner for 27 years before becoming a statesman and global humanitarian icon.

Mandela forged many strong links with members of the British royal family through their association with the commonwealth, of which South Africa is a member, including Queen Elizabeth II and Prince Charles.

In his speech, Harry referenced a treasured photograph of Mandela and his late-mother Princess Diana.

“On my wall, and in my heart every day, is an image of my mother and Mandela meeting in Cape Town in 1997,” he said.

“When I first looked at the photo, straight away what jumped out was the joy on my mother’s face. The playfulness, cheekiness, even. Pure delight to be in communion with another soul so committed to serving humanity.

“Then I looked at Mandela. Here was a man with the weight of the world on his shoulders, asked to heal his country from the wreckage of its past and transform it for the future.”

“In that photo and so many others he is still beaming. Still able to see the goodness in humanity…Not because he was blind to the ugliness, the injustices, of the world—no, he saw them clearly; he had lived them—but because he knew we could overcome them.”