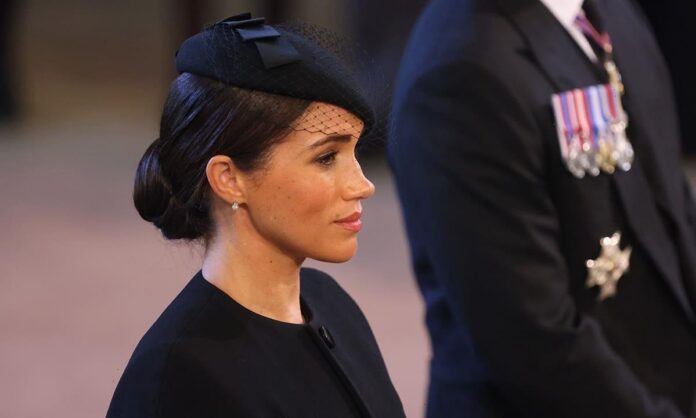 The Duke and Duchess of Sussex have joined other members of the royal family in bidding farewell to the Queen by attending her state funeral on Monday.

Since the announcement of the Queen’s death just over a week ago, an outpouring of heartfelt tributes has been offered by the nation in commemoration of the late monarch’s extraordinary life.

Prince Harry and Meghan Markle were both presents at the Queen’s state funeral, with Meghan looking radiant in a black midi cape dress by British trailblazer Stella McCartney, paired with sheer tights and chic court shoes.

Adhering to tradition, she wore an all-black ensemble that included several accessories which elevated her look and exuded a sense of enduring grace.

Meghan opted for a wide-brim translucent asymmetric hat which she styled alongside a sleek chignon bun and a pair of earrings that were infused with sentimentality. She wore pearl earrings that had been gifted to her by the Queen back in 2018 – a fitting and touching jewelry tribute.

It is not the first time that the Duchess of Sussex has turned to Stella McCartney for a masterfully chic outfit – she wore a ravishing white halterneck dress by the British label at her wedding reception – but neither is it the first time she has opted for a dress with a cape design.

While the cape dress’ origin story isn’t entirely clear, what we do know is that the style blossomed in the 1950s. Cape dresses are often thought of as demure and modest, and so they are popular among women living within conservative, religious communities.

However, the hybrid style is also a hit with the royals – in fact, Princess Kate wore an extraordinarily decadent gold version by Jenny Packham at the premiere of No Time To Die last year.

Back in 2018, Meghan attended a concert at the Royal Albert Hall, held to celebrate the Queen’s 92nd birthday, wearing a style thought to be identical to that which she wore on Monday, differing only in color. For the celebratory concert, Meghan opted for the navy, whereas she opted for a sleek black version for Her Majesty’s funeral.

The service was held at Westminster Abbey in the heart of Central London and her coffin will be taken to St George’s Chapel at Windsor Castle for a televised committal service.