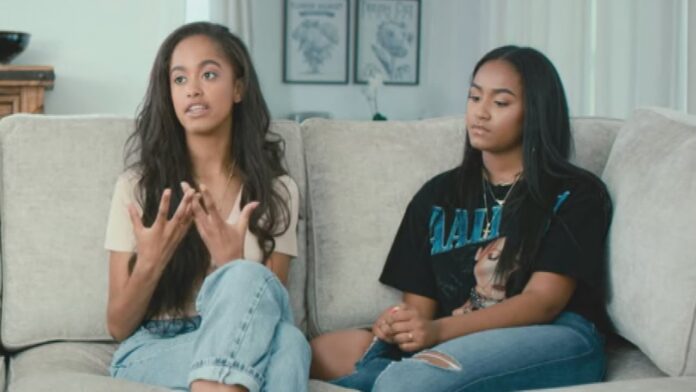 Michelle Obama shared a rare glimpse inside the gorgeous family home that she shares with her husband, former US President Barack Obama – featuring the cutest tribute to daughters Sasha and Malia!

On Thursday evening, the 58-year-old shared a beautiful black and white portrait of herself reclining in an armchair at her luxurious Washington, D.C. home. Michelle looked at ease as she knitted under the soft light of a table lamp, but fans may have missed that on the same table was also a never-before-seen framed photograph of her now grown-up daughters.

The rectangular framed picture showed Malia, now 24, and Sasha, 21, as young girls. In the photograph, Malia is beaming as she wraps a protective arm around her little sister Sasha who appears to have been the cutest baby with a neat mop of curls!

The interiors of the room boasted a high ceiling, simple block colours, a vase filled with delicate wildflowers, and a statement rug.

The former First Lady’s 51.8 million strong Instagram following loved the image and they flooded Michelle’s comments section with admiration about everything from Michelle’s love of knitting to her choice of loungewear. But the resounding feedback was: “That is one cool image.”

Michelle spoke about how her family had divided the spaces within their home when they first moved in. The acclaimed author joked with Ellen DeGeneres on her television show, saying that Barack had been shortchanged with the new home.

“He doesn’t have enough closet space – sorry,” she quipped. “He’s got the smallest room for his office.”