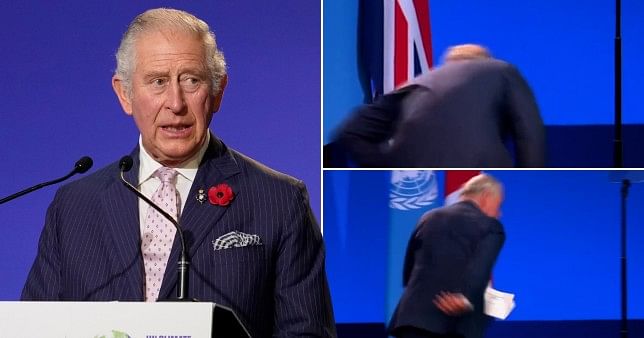 Prince Charles avoided a serious injury after he nearly fell to the floor in his dramatic opening to COP26 summit.

Prince Charles, 72, showed up at the summit in Glasgow.  However, he nearly fell when he took the stage to deliver his speech.

The Prince of Wales was set to give a keynote speech to the delegates at COP26. As he made his way onto the stage, he stumbled and nearly fell to the floor. Thankfully, Prince Charles avoided a serious fall.

The heir apparent appeared to catch his foto and lost his balance which got the audience worried about him. The senior royal managed to regain his balance without falling.

The Duke of Cornwall was visibly shocked but it didn’t take long for him to regain his composure. He gathered himself before he started his speech.

The netizens immediately took to Twitter and expressed their concern for the future king. Many said they were worried when they saw the royal’s near fall when he walked his way to the podium for his speech.

“Wow! That was a near fall for Prince Charles at COP26. Very worrying,” one commented.

Harry Cole, the political editor of The Sun, shared a snap of Prince Charles’ near fall on stage and said it was a “worrying moment.” Fortunately, Prince Charles appeared fine when he began his speech.

“oh god no Prince Charles just fell over on the way up to his speech,” Ava-Santina added.

When the Prince of Wales delivered his speech, he urged the leaders to stop arguing and work together instead to face the “existential threat.” He reminded them of the heavy burden on their shoulders and how the world’s eyes and hopes are upon them.

At the World Leaders’ Summit, he also called on the leaders to reward communities for the protection of forests and safeguard and honor the rights of indigenous people and local communities.

He also appealed to the finance sector to slow down climate change because he believed that the industry has more firepower and financial capacity than the world leaders.

“We know this will take trillions, not billions of dollars… we need a vast military-style campaign to marshal the strength of the financial sector,” he added.

Meanwhile, some were impressed by Prince Charles’ speech. One said he was pleasantly surprised at the Prince of Wales as he watched and listened to him because he is noticeably aware and knowledgeable of the things he was talking about.