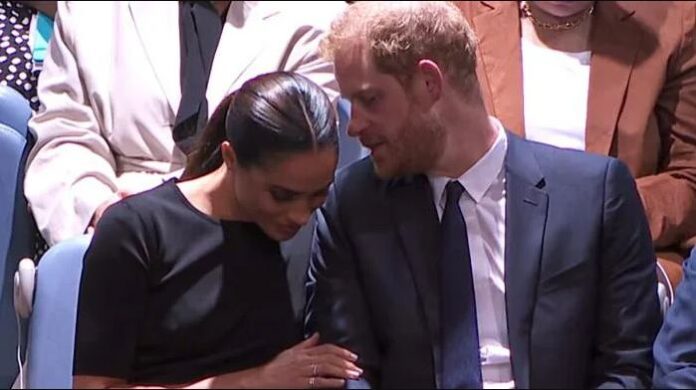 The Duchess of Sussex has told listeners to ‘be yourself no matter what any societal framework tells you as she recorded her first Archetypes podcast since the Queen’s death.

Meghan, 41, had paused the release of her Spotify podcast for the duration of the mourning period for the monarch following her death at Balmoral last month.

But in a new episode released today exploring the ‘Dragon Lady’ stereotype with journalist Lisa Ling and comedian Margaret Cho, the duchess told listeners to disregard the ‘loud voice coming from a small place.

The remarks left listeners wondering if the duchess was taking a veiled swipe at the Royal Family as she discussed how people should define themselves.

Meghan urged listeners to be their ‘best and true self’, adding: ‘You want to be weird or be sponge-like, be silly or fierce, be curious, or even self doubting or unsure some days and strong and brave on others,’ she said at the end of the episode. ‘Whatever it is, that’s up to you.

‘Just be yourself no matter what any societal framework or archetype or loud voice coming from a small place tells you that you should be.

‘Be yourself. your full complete whole layered, sometimes weird, sometimes awesome, but always best and true self. Just be you. You’re so much greater than any archetype.’

It comes after earlier Meghan has previously spoken negatively of life in the Royal Family after marrying Prince Harry.

In August, the duchess said she and Harry were ‘happy’ to leave Britain and were ‘upsetting the dynamic of the hierarchy… just by existing’ before they quit as senior royals.

In a bombshell interview to The Cut – part of New York magazine – she claimed that what the couple asked for when they wanted financial freedom was not ‘reinventing the wheel’.

The article also heard from Harry who suggested some members of the Royal Family ‘aren’t able to work and live together’, while Meghan revealed that her husband told her that he had ‘lost’ his father Prince Charles.

A week earlier, she was also slammed for throwing a ‘punch towards the Royal Family’ after she took a swipe at being ‘labelled’ ambitious when she started dating Harry.

In the first episode of the Archetypes podcast with tennis star Serena Williams, Meghan said she does not ‘ever remember personally feeling the negative connotation behind the word ambitious, until I started dating my now husband’ and revealed the ‘pain’ that she has suffered ‘behind closed doors’.

Elsewhere in today’s podcast, the duchess took aim at Hollywood for promoting ‘Asian stereotypes’ as she criticised Mike Myers’ Austin Powers and Quentin Tarantino’s Kill Bill for ‘caricaturing’ Asian women ‘as over sexualised or aggressive’ in her first Archetypes podcast after a four-week break following the Queen’s death.

In a new episode exploring the ‘Dragon Lady’ stereotype with journalist Lisa Ling and comedian Margaret Cho, the Duchess of Sussex – a former actress in the legal drama Suits – called out the two 20-year-old movies ‘presenting caricatures of women of Asian descent’.

Meanwhile, Quentin Tarantino’s 2003 cult hit Kill Bill sees Lucy Liu star as the murderously violent Yakuza leader O-Ren Ishii. The character was described by writer India Roby as a stereotypical Dragon Lady who ‘uses her sexuality as a powerful tool of manipulation, but often is emotionally and sexually cold and threatens masculinity’.

Liu responded to the criticism last year in an opinion piece for The Washington Post, in which she argued that calling O-Ren a Dragon Lady doesn’t make sense considering the film ‘features three other female professional killers in addition to Ishii’.

Meghan began today’s podcast by talking about her experience of growing up in Los Angeles which was ‘full of culture that you could see, feel, hear and taste on a daily basis’ and said she had a ‘real love’ of getting to know other cultures.

She said she was not aware of the stigmas faced by women of Asian descent until many years later.

Brief clips from Austin Powers and Kill Bill were played to illustrate Meghan’s point. The Kill Bill character O-Ren Ishii is heard removing the head of Japanese crime boss Tanaka with a a samurai sword, before stating: ‘The price you pay for either bringing up either my Chinese or American heritage as a negative is: I collect your f****** head.’

Meanwhile, Austin Powers is heard being asked by Fook Mi for his autograph. When she told him her name, he replies: ‘Oh behave baby.’

‘Movies like Austin Powers and Kill Bill presented these characters of Asian women as oftentimes over sexualized or aggressive,’ Meghan says. ‘And it’s not just those two examples, there’s so many more.’

Expanding on the concept later in the podcast, the duchess told Cho: ‘The Dragon Lady, the East Asian temptress whose mysterious foreign allure is scripted as both tantalising and deadly,’ she told Cho. This has seeped into a lot of our entertainment. But this toxic stereotyping of women of Asian descent, it doesn’t just end once the credits roll.’

In the introduction to today’s episode, Meghan spoke of going to a Korean spa with her mother as a teenager, adding: ‘It’s a very humbling experience for a girl going through puberty because you enter a room with women from ages nine to maybe 90, all walking around naked and waiting to get a body scrub on one of these tables that are all lined up in a row.

‘All I wanted was a bathing suit. Once I was over that adolescent embarrassment, my mom and I, we would go upstairs we would sit in a room and we would have a steaming bowl of the most delicious noodles.’

At one point Ling told Meghan how, when she was a broadcaster at Channel One, she was named hot reporter in the Rolling Stone’s Hot List. ‘Someone at my place of work cut out that article, drew slanted eyes over the eyes and wrote ‘yeah, right’ and then put it back in my mailbox,’ Ling said.

She said: ‘It was like every kernel of excitement that I possessed just withered away. It was so devastating that someone that I would see every day in my place of work where we’re supposed to feel comfortable, just harboured those feelings about me and had the nerve to make it racial.’