GamesChowkPolitical, Royal, Games and Health News
HomeNewsSasha Obama is bohemian-chic in cropped shirt and tie-dye skirt during an...
News 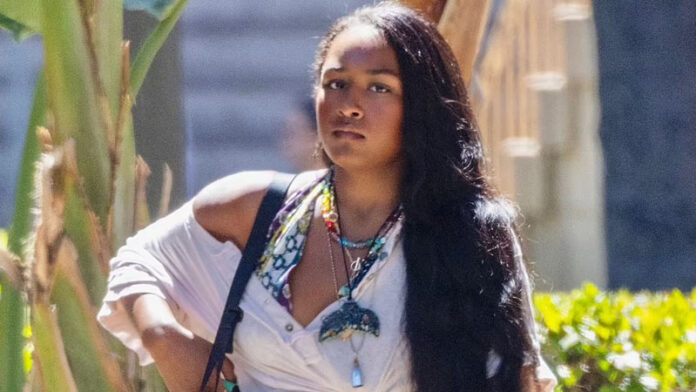 Another day on campus, another scene-stealing outfit from Sasha Obama! The daughter of Michelle and Barack Obama showed off her Bohemian fashion choices in an ensemble that was sure to turn heads.

Sasha looked effortlessly cool in photos published by the Daily Mail wearing a long, tie-dye skirt, and a cropped shirt which she’d made even shorter by rolling it up and tucking it under her bra.

She’d paired her look with colorful Nike sneakers and accessorized with bangles, necklaces, rings, and a couple of piercings too!

The 21-year-old displayed simple earring studs and put her stomach on display to show off her navel piercing.  Sasha’s hair was loose and she looked stoic as she vaped and listened to her trusty AirPods.

The student – who is going into her senior year at USC – turned 21 earlier this year and at the time, Former First Lady, Michelle, couldn’t help but pay tribute to her.

The mom-of-two delighted her social media followers with a throwback snapshot from when Sasha was a baby.

In the image, she was cozying up to her little girl who was adorable with her chubby cheeks. She wrote: “My baby has grown into a beautiful, independent, compassionate, highly capable young woman. But you will always be my littlest pea. I’m so proud of the human you are becoming. Love, your Mommy.”

Sasha now lives with her sister, Malia, in Brentwood, California, after relocating there from Michigan earlier this year. They both appear to be thriving in their new living arrangement and have been spotted out on several occasions together.

In order to pursue a profession as a screenwriter, Malia moved to California after receiving her degree from Harvard.

Malia and her sister Sasha are much loved by fans, and the former President of the United States of America appeared on The Late Late Show with James Corden back in May 2021 and was full of praise for his two daughters after joking that he was concerned that they would end up as “weird kids”.

Michelle also opened up about the feeling of her and Barack being empty-nesters to Ellen DeGeneres, and while she misses her children she said they’re “doing well,” and have also become, “just amazing young women”.