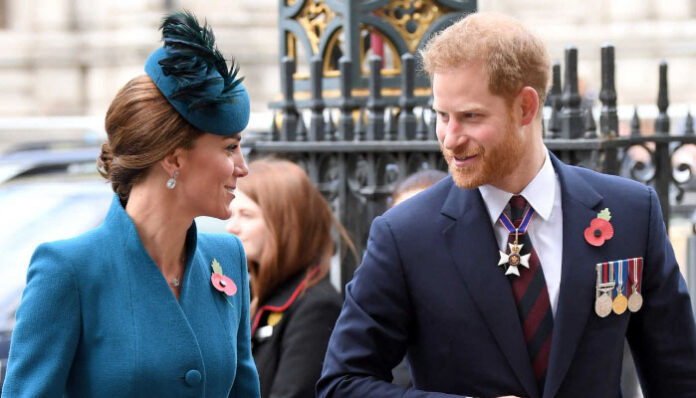 Is Kate Middleton trying to reconnect with Prince Harry? A gossip magazine claims the Duchess of Cambridge begs her brother-in-law to let Meghan Markle tone it down. Let’s dive into the claims.

This week, New idea reports that Kate Middleton is getting tired of dealing with Prince Harry and Meghan Markle’s ongoing efforts to undermine the royal family. According to the report, Middleton was particularly troubled by Harry’s recent announcement that his memoir would hit shelves in December.

“His marketing team will let it hang over Christmas, but it seems there may be an ulterior motive,” a snitch confided. “The news of the delay of the book coming out in the same week as Cambridges Earth shot plans was a sign that Harry and Meghan are not happy about stepping on what they consider to be ‘Sussex turf’.”

Apparently, Middleton actually reaches out to her brother-in-law to stop hitting such low blows. “Everyone knows Kate got along so well with Harry before Meghan came,” explains an insider. “She knows it’s difficult between the brothers right now, so she’s happy to be the go-between. Kate wants to end all the drama.”

For starters, we want to ask an important question: who in the world is intercepting the communication between Prince Harry and Kate Middleton? No average staffer or palace tourist could get their hands on this kind of information.

So, are we to believe that high-ranking royals are bending the ears of this outlet? We’re not that gullible. It is clear to us that this alleged “insider” is a fictional character.

Plus, we just don’t believe Middleton is upset by the timing of Harry’s memoir release. The royals know that publishers are the ones who control the publicity surrounding their books. We doubt Harry intended to jeopardize the success of his brother’s work – there’s just no reason for us to jump to any conclusions.

Moreover, it is absolutely ridiculous to suggest that Harry or Markle regard environmentalism as ‘Sussex turf’.

It’s a far too broad issue. There are decades of environmental activism predating the Sussexes, and the issue only gathers more activists every year. So when the magazine claimed that the Sussexes were completely territorial on the extremely broad issue, we were sure that this article had not been published in good faith.

More Sussex drama from the outlet

Besides, we know better than to trust anything New idea written about Prince Harry and Meghan Markle. Earlier this year, the outlet claimed that Kate Middleton was secretly texting Prince Harry behind her husband’s back.

Then the magazine reported that Harry planned to return to England. Then the publication even accused Markle of betraying the royals by sitting down for another all-encompassing interview. So no, we are immediately suspicious of everything New idea writes about the royal couple.