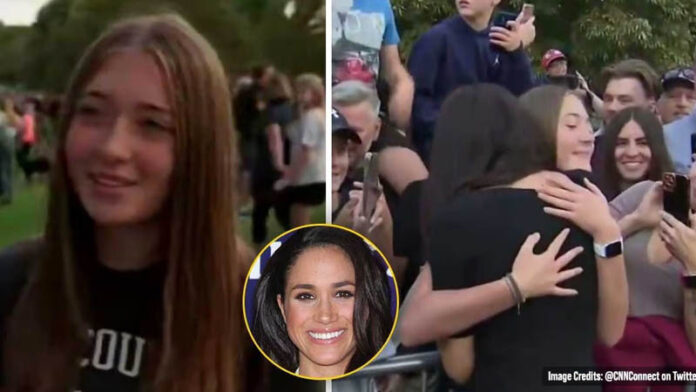 “The Duchess of Sussex joined her husband Prince Harry and in-laws Prince William and Kate Middleton for a surprise walkabout at Windsor Castle on Saturday, two days after the death of Queen Elizabeth.” PEOPLE reported.

The former actress eventually joined her husband and the rest of the Royal Family to participate in the rituals two days after the Queen’s passing.

The 41 years old greeted a crowd of well-wishers outside Windsor Castle along with the rest of the Royals and received a very welcome from the general public.

In her 40-minute encounter with the UK residents, Meghan made sure to individually talk to every person and comfort them with her calming voice.

According to CNN, a teenage girl, Amelka Zak, also lined up outside the castle to pay her tributes to the late monarch.

“The royal mother-of-two, who stepped back from royal duty last year and now lives in her $14 million mansion in the US, spent time chatting with Amelka before the pair embraced,” wrote Daily Mail.

Speaking to the news outlet, Zak said that when Meghan made a surprise appearance with the other three Royals at the gates of the Royal castle, she felt the need to hug the Duchess and tell her that the British people loved her.

“We were just waiting for her to come, and she came near me and asked my name and how my day was, how long I was waiting, and I asked her if I could have a hug, and she hugged me back. It was quite an amazing moment. I’m still shaking now.”

“Everyone was kind of cheering me on, and I guess I felt like I needed to embrace her because I look up to her in some way, and it felt like the right thing to do.”

“And it was fine, but I just wanted to show her that she’s welcome here, I guess. And wanted to hug her after everything that’s happened, now.”

It has been reported by E! “On September 10, Meghan, the Duke of Sussex, and the Prince and Princess of Wales held a united front as they greeted the crowd of mourners and looked at tributes that were left for the late Queen following her death on September 8.”

It is the first-ever public reunion of the four royals after Commonwealth Day on March 19, 2020, a few days before the pandemic hit the world.

Among the well-wishers and mourners of the Late Queen, another fan of the Duke and Duchess of Sussex spoke to the couple and told Daily Mail,

“It’s lovely to see them both together. Maybe they can get back to a proper relationship.”

“Lovely ripple went through the crowd as they approached. Hopefully, the healing between Harry and his brother can start now. I’m just so excited to have seen them both together. It’s lovely.”